His Holiness the 14th Dalai Lama 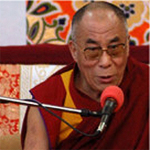 His Holiness the 14th Dalai Lama, Tenzin Gyatso, is both the head of state and the spiritual leader of Tibet. He was born in 1935 to a farming family in a small village located in Taktser, Amdo, in northeastern Tibet. At the age of two the child was recognized as the reincarnation of the 13th Dalai Lama, Thubten Gyatso. His Holiness
began his monastic education at the age of six.

In 1950, he was called upon to assume full political power after China’s invasion of Tibet in 1949. But finally, in 1959, with the brutal suppression of the Tibetan national uprising, His Holiness was forced into exile, living in Dharamsala, northern India, the seat of the Tibetan political administration in exile.

In 1989 he was awarded the Nobel Peace Prize for his non-violent struggle for the liberation of Tibet.  He has consistently advocated policies of non-violence, even in the face of extreme aggression. He also became the first Nobel Laureate to be recognized for his concern for global environmental problems.

Since 1959 His Holiness has received over 84 awards, honorary doctorates, and prizes – in recognition of his message of peace, non-violence, inter-religious understanding, universal responsibility and compassion.