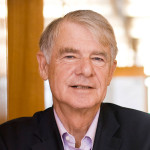 Wolf Singer was born in 1943 in Munich, Germany. He was accepted to study medicine at the University of Munich and completed his third year on an exchange to the University of Paris. In 1968 he completed his thesis entitled: The role of telencephlic commissures in bilateral EEG-synchrony under Dr. O. Creutzfeldt at the Max Planck Institute for Psychiatry. After obtaining his license to practice general medicine he went on to the University of Sussex in England in order to acquaint himself more closely with methods of psychophysical examination. There he completed post-doctorate training in Psychophysics and Animal Behaviour at the department of Psychology. In 1972 he was hired as a staff member of the Department of Neurophysiology at the Max Planck Institute for Psychiatry under Prof. Lux. He began this professorship in neurophysiology as coordinator of the Project ‘Neurophysiological basis of pattern processing in the visual system.’ He obtained his habilitation in physiology at the Medical Faculty of the Technical University, Munch, in 1975 and in 1980 he became professor in physiology at the Technical University Munich. Since 1981 he is the director of the Max Planck Institute for Brain Research in Frankfurt. Wolf Singer is also a member of the editorial board of many of the most prestigious journals in the area of neuro- science. He has been President of the European Neuroscience Association and is on the Board of European Science Foundation. Since the discovery of synchronous firing in the visual cortex in the mid-eighties he has pursued with greatintensity the hypothesis that synchronization of distributed responses serves as a signature of relatedness in distributed parallel processing in the cerebral cortex. Wolf Singer examines the possibility that response synchronization serves the dynamic binding of neuronal responses into coherent population codes, thereby creating representations that are complementary to single cell codes. In 2002 Wolf Singer became Chevalier de la Légion d’Honneur and in 2004 he co-founded the Frankfurt Institute for Advanced Studies (FIAS) and was awarded the Aschoff Prize in 2005 and the INNS Hebb Award in 2006. In May 2008 he was awarded the Dr. h.c. from Rutgers University, NJ, USA and in July 2008 he initiated the foundation of the Ernst Strüngmann Institute (ESI) for cognitive sciences.