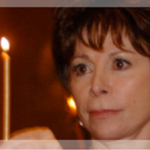 Chilean, writer and niece of Chile’s President, Salvador Allende killed during the military coup in 1973. Author of the international bestseller The House of Spirits.

Isabel Allende, born in 1942 in Lima, grew up in Chile, Bolivia, and Lebanon; left Santiago de Chile after General Augusto Pinochet’s bloody military overthrow of her uncle Salvador Allende’s government in 1973. For a long time she worked as a journalist in her sanctuary in Venezuela. When her grandfather died at the age of 99 in 1981, she started writing letters to him.

Allende’s first world success emerged from this: The novel The House of Spirits, which was adapted for the screen by the Danish director Bille August in 1993, starring Jeremy Irons, Meryl Streep, Winona Ryder, Glenn Close, and Antonio Banderas. She then published numerous novels (Of Love and Shadows, The Stories of Eva Luna, The Infinite Plan, and Paula – which is dedicated to her deceased daughter.)

Allende’s work is considered to represent the style of “magic realism” and with her feminist texts she has contributed considerably to shaping the new image of women in her homeland South America. In 1988 she met her present husband Willie Gordon during a visit to California. Since then Allende has lived in the United States. In 2003, she became a US citizen.