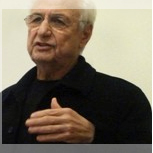 Frank Gehry was born in Toronto, Canada. He moved with his family to Los Angeles as a teenager in 1947 and later became a naturalized US citizen.

He was awarded scholarships to the University of Southern California and graduated in 1954 with a degree in architecture. While at USC he began working for Victor Gruen and Associates, a position he held off and on until 1960 when he traveled to Paris with his family. He returned to America in 1962 and established his own firm, Gehry Associates, now known as Gehry Partners, LLP in Santa Monica, California.

He established himself as one of the most prominent contemporary American architects with his open, curvilinear, diverse and sometimes playful West Coast style. In the last fifty years his work has become internationally renowned and his spontaneity and unexpected choices for structures and materials has brought a sustained energy to the fields of both architecture and furniture design. His best known works include the Guggenheim Museum in Bilbao, Spain; Walt Disney Concert Hall in downtown Los Angeles; Dancing House in Prague, Czech Republic; and his private residence in Santa Monica, California.

Gehry is a distinguished Professor of Architecture at Columbia University in New York City and he also teaches at Yale University.