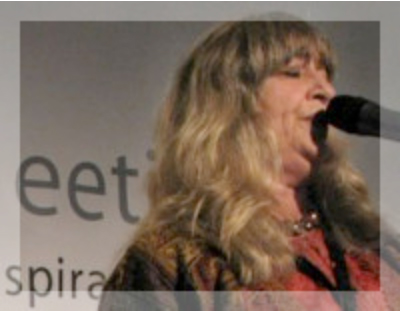 Jill Purce pioneered the international sound healing movement through her rediscovery of ancient vocal techniques, the power of group chant, and the spiritual potential of the voice as a magical instrument for healing and meditation. Through her workshops, Inner Sound and Voice; The Healing Voice; Re-enchanting the World; and Ritual and Resonance- Healing the Family,
she has taught internationally for thirty-fi ve years, teaching diverse forms of sacred chant, and especially overtone chanting. She is the author of The Mystic Spiral: journey of the Soul, a book about the evolution of consciousness in spiritual traditions, art andn psychology. For fifteen years as General Editor of Art and Imagination she produced over thirty books on Sacred Traditions, Art and Cosmology. After receiving an Honours degree in Fine Art, she was awarded a Leverhulme Research Fellowship in King’s College Biophysics Department, University of London. Interested in the magical properties of the voice, and the ancient power of group chant, she teaches Mongolian overtone chanting (producing chords or simultaneous notes octaves apart). which she studied in the Himalayas with the chantmaster of the Gyutö Tibetan Monastery and Tantric College. She has been following the philosophy and practice of Dzogchen since 1978, when she first met the Tibetan Lama, Namkhai Norbu Rinpoche. She has worked with American Indians and Shamans from different traditions. Some of her published articles include: Patterns of Growth in Nature and Consciousness; Time and the Music of Form; Creative Tension; Harmonics of Mind and Body.

She stayed in India with Father Bede Griffi ths, where she also taught. She has taught in a number of closed Anglican monasteries to
re-establish the lost contemplative power of chant. She taught the English Shakespeare Company and led seminars and workshops for English National Opera, as well giving lectures and workshops all over the world. She lives in London with her husband, the biologist Rupert Sheldrake and their two sons.