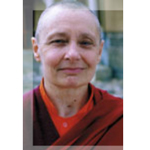 Founder of a Buddhist Nunnery for Himalayan women in Northern India, subject of Cave in the Snow by Vicki Mackenzie, and author off Reflections on a Mountain Lake and Three Teachings.

In 1943, Tenzin Palmo was born in London as Diane Perry. Her father was a fishmonger, her mother a psychic. Already as a child, she felt the burning question of how to obtain perfection. The Semitic religions did not provide her with a satisfactory answer. When her quest led her to existentialism at the age of 18 she happened to read a book on Buddhism. She was absorbed instantly and decided to become a Buddhist. She threw away her clothes, stopped using make-up and separated from her boyfriend. At the age of 20, she traveled to India to look for her guru. She found H.E. the Eighth Khamtrul Rinpoche, who ordained her as a Buddhist nun in 1964. Diane Perry turned into Tenzin Palmo.

After some years of spiritual practice she retreated into solitude: Despite the other nuns’ warning against the cold, wild animals, robbers, and other dangers, Tenzin Palmo moved to a small cave at 4,000 m (13,000 ft) above sea level in the Himalaya. There she spent 12 years of her life in meditation. During that time, she hardly saw anybody and took care of herself mostly without any help. She used the summer as a time to prepare for winter, which allowed her to dedicate herself completely to her practice.